With the increasing demand for environmental protection in countries around the world, the demand for new energy sources such as solar photovoltaic, wind energy, and plant alternative energy is rising, especially in recent years, under the national 14th five-year policy, a "dual carbon" energy strategy has been proposed. , New energy technology has been greatly promoted and applied. As an indispensable technology in new energy applications, inverse electrical appliances have also been used more and more widely.

The law of commutation points out that when a circuit goes from one state to another state, the current or voltage in the circuit must undergo a transient process, and the occurrence of the transient process will inevitably cause dramatic fluctuations in electrical energy. In an energy conversion circuit (Such as AC→DC, DC→AC), this kind of violent fluctuation of electrical energy is the surge impact in the field of electricity. It is a transient phenomenon and an unavoidable objective phenomenon in circuit operation. The impact damage of power components does exist. NTC power thermistor in the inverter, due to its negative temperature characteristics, can be used to suppress the current (or voltage) spikes in the transient process. Protect key power components, thereby increasing the service life.

The figure shows a typical inverter circuit. When the inverter is working, the inverter bridge (consisting of G1~G6 switch tubes) is in the high-speed on-off state. 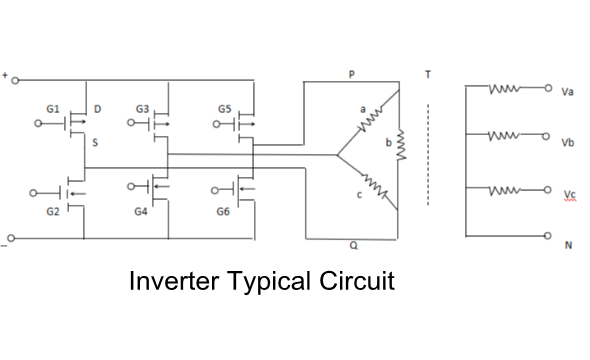 When the circuit works, under the action of the PWM pulse, the switching tubes G1~G6 will turn on or off in a certain order. At this time, the D or S poles of these switching tubes will be subjected to extremely high current spikes. The greater the conversion power of the circuit, the greater the amplitude of energy fluctuations. The peak impact strength is greater. At this time, at these key nodes, choose an NTC power thermistor with appropriate parameters in series, which can absorb most of the high-frequency spike current that occurs at this time, and effectively protect the life of the key switch tube on the inverter bridge.

The inverter mid-power NTC thermistor produced by AMPFORT has the corresponding specifications MF72 and MF73T-1. According to the power requirements, the power NTC thermistor has a variety of specifications and models to choose from, with a diameter of Ø50. The maximum steady-state current of the power NTC thermistor can reach 80A, and the maximum steady-state current of the ultra-low power NTC thermistor with a diameter of Ø3mm is also up to 2A, which is rare in the industry. The power type produced by Shiheng Electronics NTC thermistor has a strong ability to suppress surge currents. The maximum capacitance in the internal control standard is two levels higher than the standard value, especially the B value is large, the residual resistance is small, the same electrical performance is smaller, and the power consumption is more Low, the main products have passed UL, TUV, CQC safety certification, product performance is excellent, deeply favored by users.